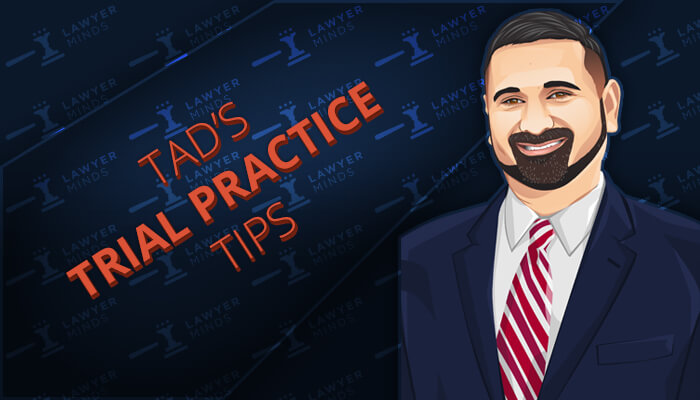 Join me as I talk tips for upping your trial performance game. I’ll cover all aspects of the trial, including, but not limited to, choosing a jury, opening statements, witness testimony and cross-examination, closing arguments, jury instruction, and verdicts. Discussions are welcome in the comments section.

There is substantial and growing scientific literature on implicit bias. While there is significant research regarding implicit biases for criminal cases, there is a lack of comparable studies in the civil context.

As trial attorneys, it’s crucial to recognize instances of implicit bias in ourselves and others in the courtroom, so we can tackle the issue and prevent any biases from negatively impacting our clients’ cases.

Implicit Bias in the Courtroom

In simple terms, implicit bias has to do with the attitudes or stereotypes that unconsciously affect our understanding, actions, and decisions. Implicit bias occurs automatically and encompasses both favorable and unfavorable assessments and preferences. Oftentimes, these hidden biases influence our behaviors towards others without us realizing it. Some of the most common characteristics that trigger bias include:

Because lawmakers recognize implicit bias as an issue, some laws have been enacted to reduce the instances of this issue wrongfully impacting individuals. For example, the Age Discrimination in Employment Act of 1967 protects applicants and employees 40 and older from discrimination based on age in hiring, promotion, discharge, compensation, or terms, conditions, and employment privileges. In addition to that, Title VII of the Civil Rights Act of 1964 prohibits employers from discrimination against employees on the basis of sex, race, color, national origin, or religion.

While implicit bias is a normal part of the human experience, it has the potential to influence a trial. In the courtroom, attorney bias, judicial bias, witness bias, and juror bias all have the ability to affect the outcome of a case.

While we may not want to admit it, we do have to grapple with bias as attorneys. Attorney bias has the potential to impact much more than jury selection. ABA Model Rule 8.4(d) makes it known that it is considered professional misconduct for a lawyer to engage in conduct that is prejudicial to the administration of justice. While representing a client, an attorney cannot knowingly manifest by words or conduct bias or prejudice based on race, sex, religion, national origin, disability, age, sexual orientation, or socioeconomic status.

What is worse is that our implicit bias may harm our client’s cause. Implicit bias in jury selection could result in excluding jurors that would be favorable for reasons that are not based in science. The only true way to get beyond this bias is to perform focus groups to test our theories and determine the true characteristics of a favorable juror.

Judicial bias is quite real. While judges are supposed to be impartial and only consider the facts and evidence they’re presented with, they are human. They do have implicit biases influenced by their identity, experiences and experience with what they have seen in the courtroom throughout their careers. A number of studies have examined the impartiality of judges. Like “Litigators Beware: Implicit Bias,” some studies note that judges rely more on intuition than deliberative judging when deciding matters before the bench.

While the reliability of a witness is not typically questioned without intent or purpose behind the bias, there has been research discussing the unreliability of eyewitness testimony. This is particularly true with regard to cross-racial identification. It should be left up to the discretion of the trial judge to determine whether expert testimony should be admitted and whether jury instruction on point should be given. But, in representing our clients before a jury we must seriously consider if cross-examination on the issue of bias is appropriate and what, if any, expert testimony should be submitted during the trial.

During jury selection, the goal is ultimately to identify and remove any potential jurors who will be unfavorable to your case and your client. Even with careful vetting, there’s a chance that a juror’s implicit bias could impact a case. Implicit bias is difficult to root out during jury selection because direct questions on the issue will certainly lead to denial. The attorney conducting voir dire will have to find another way to examine a juror’s predisposition to bias without insulting the juror or causing them to shut down or give misleading answers.

Eliminating Bias in the Courtroom

Eliminating bias in the courtroom starts with spotting when your brain starts to initiate its biases. When you can recognize your biases, you can focus on acknowledging and overcoming them through connections, relationships, effective communication, and mindfulness.

When presenting a case in court, think about whether the biases you have about the matter actually make a difference in what your client has experienced or why they are pursuing a civil lawsuit. If the answer is no, avoid focusing on issues during the trial that could unintentionally formulate biases for the judge and jurors. Also, consider making implicit biases more explicit and warning jurors as early as jury selection that their role requires they avoid any form of prejudice or bias.

Everyone in the legal system needs to be aware of and on the lookout for individual and institutional forms of implicit bias. When bias in the courtroom is reduced or eliminated, your client will have better chances at a fair trial outcome. When you recognize biases and take the necessary steps to eliminate them, you’ll be able to ensure the words, actions, and behaviors of those in the courtroom are consistent with the principles of fairness of equality.